In 1797 a Frenchman evaluated the city's real estate market probably for the Holland Land Company, private Dutch bankers who were often asked to by Americans to invest in their real estate. The agent went beyond the usual bewilderment at so few houses in so huge a space, and counted the houses distinguishing those made of brick from those made of wood. Knowing that all structures built to accommodate workers were to be removed when Congress arrived, he didn't count or characterize the temporary housing mostly on public squares where those workers and the hired slaves lived.

In 1795 another Frenchman also counted the houses, this time only those made of bricks, but it strikes me that the memo he wrote for his bosses at the Holland Land Company graphically shows in its own way the relative importance of the use of slave labor in the eyes of visitors and speculators. 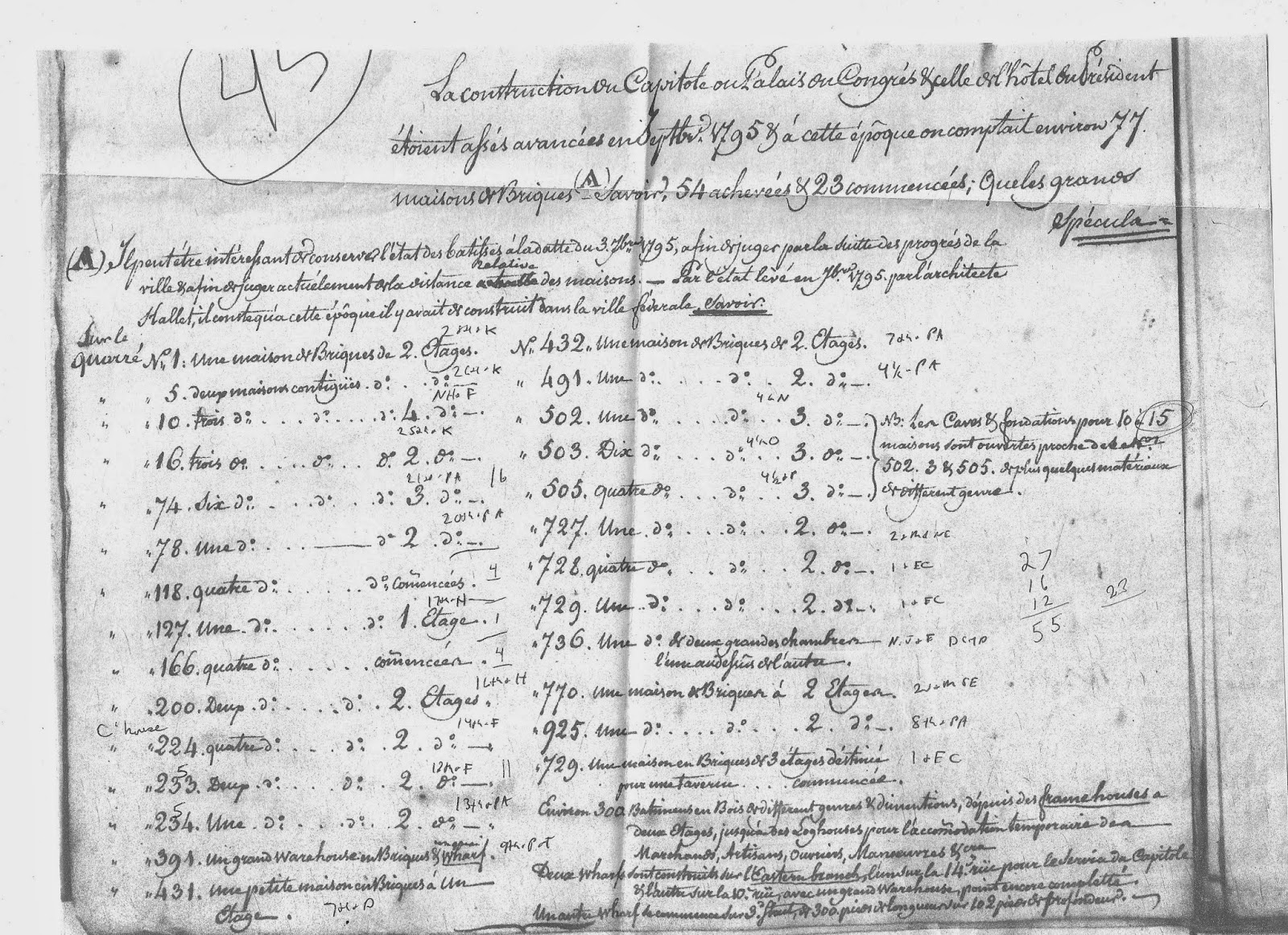 As you can see the memo is in French, and the few squares that have brick houses are writ large. (To make the document easier to use when I wrote my book Through a Fiery Trial, I noted the street corners of each of the squares.) In the fine print in the lower right hand corner of the document, he mentioned the temporary wooden houses for workers, ranging from two story frame houses to "Loghouses." Then he characterized the workers in the varying grades of temporary housing. He did not mention slaves, esclaves in French. Instead he wrote: "Artisans, Ouvriers, Maneuvres & c."

In this context, artisans probably translates as craftsmen, ouviers as skilled workers, and maneuvres as unskilled laborers. All seemed equally unimportant in the eyes of a speculator. A Frenchmen in that era was much less likely than Americans to distinguish whites from blacks, so that he didn't mention slaves is not remarkable. But this document is one of the few that might have shined light on whether the white and black laborers lived together. It doesn't and so one of the more remarkable assertions in my book, that the free and slave, white and black, laborers lived together is still standing. I base that on the widespread labeling of slaves as "Negroes" in the commissioners' records while at the same time where they lived was called the "laborers' camp," not the Negroes' camp.

The large version of the document below will make it easier to read the French. Then below that enlargement, I've added the July 1797 census of houses, also in French, in which there is no allusion to log houses, but mention of 20 to 25 small wooden houses, and other words in French that I can't read, though I think there might be a reference to workers. If placing these houses between squares 973 and 1001 means anything, then they were well east of the Capitol Square. That would put their camp between East Capitol Street and Pennsylvania Avenue just east of 11th SE. The publicly owned square there is Lincoln Park. At that gap of squares, where no houses are listed, the Frenchman wrote "et 20 ou 25 petites cases en bois...." then I can't decipher. Perhaps somebody acquainted with late 18th century French handwriting and usage can help.

The number of huts is probably right for housing the 100 to 120 laborers working at that time, at least 90 of them slaves. The location certainly would have been considered "Capitol Hill." Arguing against a camp being in that area is this: Tunnicliff's Inn was at 7th Street, four blocks to the west, and Tunnicliff kept a diary in which he never mentioned the commissioners' laborers while at the same time alluding to other problems in the neighborhood, especially its isolation. 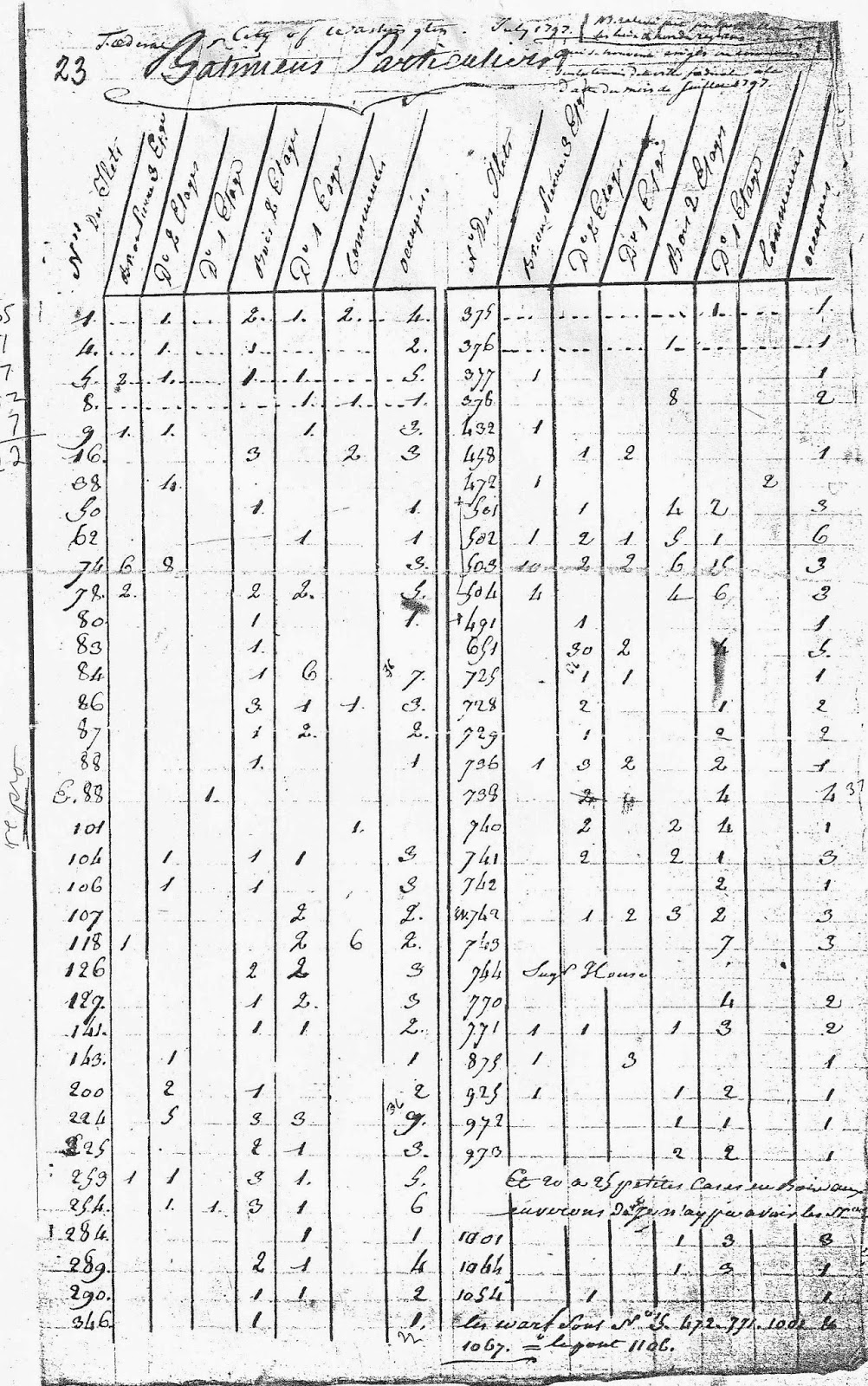 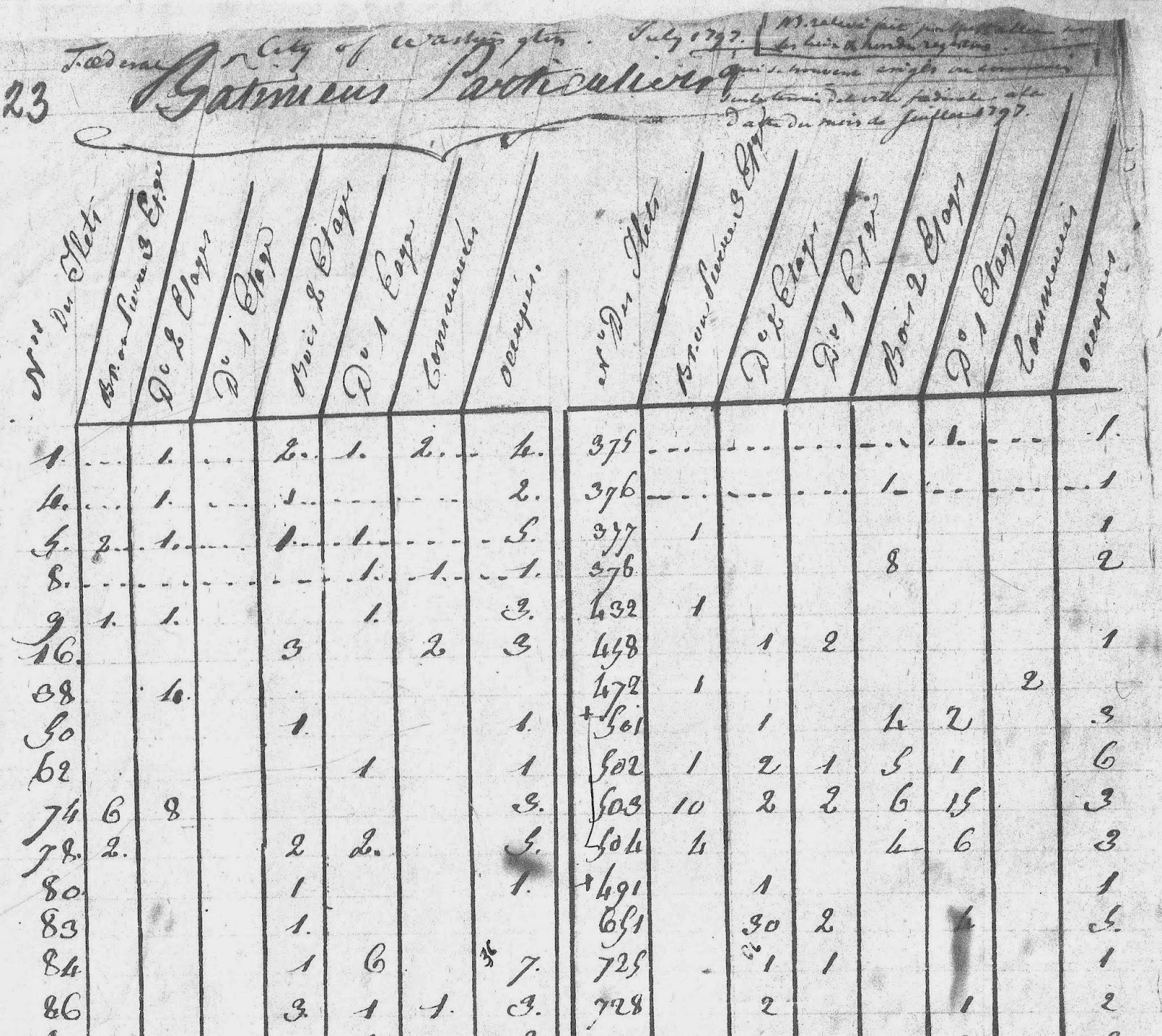 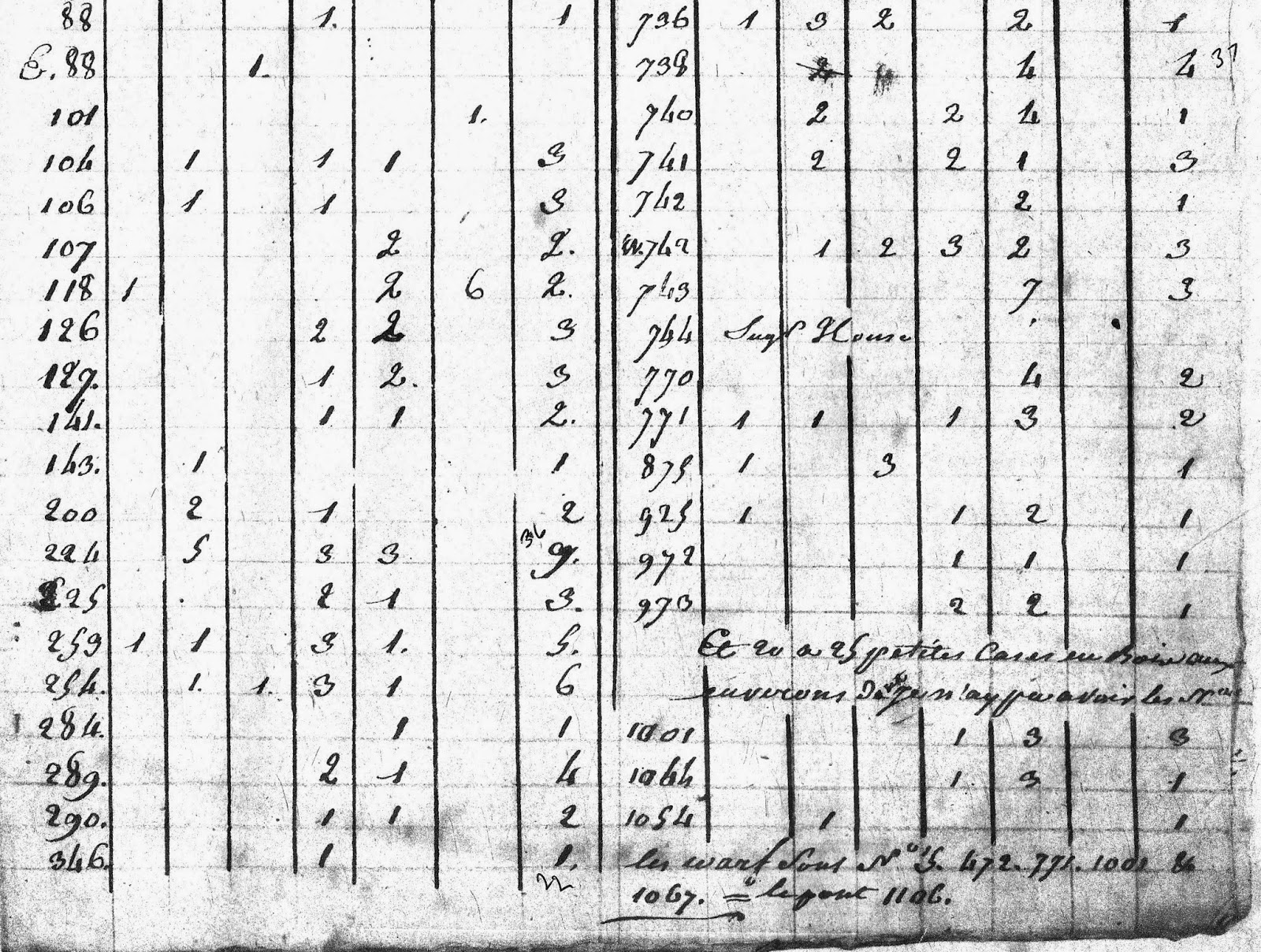