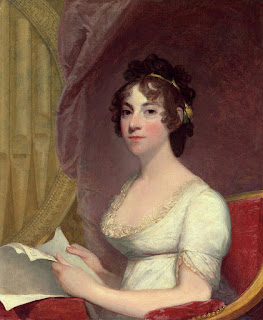 In 1800, Mrs. Thornton's occasional kitchen and social notebooks grew into a diary, although she regretted in her March l entry that: "This little Journal is rather an account of my husband's transactions than mine, but there is so little variety in our life that I have nothing worth recording, and this may rather be called a memorandum than a Journal." The passage explains why even as we explore Anna Maria Thornton's diary, it makes sense to continue to call her Mrs. Thornton. While reading her diary, one doesn't get a sense of what Anna Maria was really like. She was not a dull person and had grown up in the largest city in the country. She was well read in both English and French literature. However, she was not disposed to talk about the emotions and motives of her husband, much less her own. That leaves her brief entries open to interpretation.

For example, after dinner on Saturday, on January 4, the Thorntons and Mrs. Brodeau went by carriage to view the "General's houses." Since he had handled Washington's money for financing construction of his houses, Thornton had things to do as executors prepared the estate for probate. It seems money was on his mind since she noted: “the money paid to the undertaker of them having all gone thro' my husband's hand, he having Superintended them as a friend.” Mrs. Thornton had written nothing about Washington's death and funeral at Mount Vernon in the first three daily entries in her diary. She found no way to communicate the depths of her husband's mourning. Is it possible that Thornton's taking his wife and mother-in-law to Washington's houses was a way to share his mourning for his "friend?"

The North Wing of the Capitol in 1800 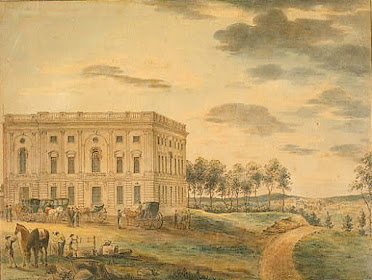 Then they went to the Capitol where "we stayed for some time by a fire in a room where they were glazing windows while Dr. T-n laid out an oval round which is to be the communication to the Gallery of the Senate room."(1) This would be the only mention in the diary of Thornton actually working inside the Capitol. In all the bickering over the work done in the building, no one ever alluded to Thornton actually doing anything inside the building save for once showing George Hadfield, the young supervising architect of the Capitol from 1795 to 1798, what had been done. Did he go into the building on a late Saturday afternoon in order to avoid seeing the bricklayers and carpenters who would build any walls needed to make the "oval round?" Or was he trying to avoid James Hoban who was then the supervising architect at the Capitol? Did he bring his wife and mother-in-law with him to avoid harassment from the glaziers who might have a beef with Commissioner Thornton? As he laid out the oval round was he applying lessons learned from Law's house or designs for Tayloe's as yet unfinished house? Did he have to do something that day to prepare his mind for the next challenge he might face: designing the monument for his "friend" that would be in as yet unbuilt grand vestibule as he called the Rotunda? By the way, there are no more mentions of the "oval round" in her diary.

Thus, a relatively concise diary can engender much commentary. Indeed, architectural historians find evidence for how Thornton designed the Octagon and evidence that he did design Law's house. But early in 1800 honoring his "friend" was paramount.

In 1793, Thornton had suggested a memorial to Washington as the focal point under the dome. But when he got back to the city after the funeral, he realized that no one seemed to remember that. He wrote a letter to John Marshall whom he had never met. He knew from the newspapers that he had chaired the joint House and Senate committee on Washington's death.

Thornton used rhetoric that suggested that his opinion was requisite to the on-going planning. He wrote that he had "doubted not" that the president and congress would do the right thing. He encouraged Marshall to use the eventual placement of the body in the Capitol to assure that the building in all its grandeur would soon be completed just as described by the plan Washington accepted. That would make the Capitol as a whole a magnificent temple. He also reported that upon his suggestion the corpse was "enclosed in lead" in order to best preserve it for its ultimate burial. Then he suggested that congress pass a bill in secret assuring the eventual burial of Mrs. Washington in the temple. He added that he wrote "unknown to any of the family."(2) 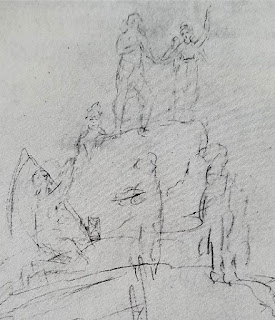 Thornton's idea for a monument to George Washington

On the next day, Thornton was reminded that there was another President. The commissioners received a letter from Navy Secretary Stoddert reporting that the president planned to ship his furniture to the city in June. What prompted the president's announcement were two letters. On November 21, 1799, Commissioners White and Thornton wrote to Adams assuring him that if the President's house wasn't ready in time "that a good house in a convenient situation may be provided at the seat of Government for the use of the President until that intended for his permanent residence shall be finished."(3)

Then on December 13, 1799, Commissioner White paused in Leesburg, Virginia, during a snow storm as he made his way from the federal city to his home in Winchester. There he wrote a private letter to President Adams that amplified the assurance made in the board's letter. "It was not thought proper in a public paper to be more particular," White explained, "but the houses alluded to were, one building and in great forwardness near the Presidents Square, by Mr Tayloe of Virginia, and two new houses built by Mr. Carroll and Mr Law, near the Capital—Any one of these three is better than the President of the U. States, as such, has resided in—."(4)

Adams bristled at being told where he might have to stay and jumped to the conclusion that the commissioners wanted to park him in Washington's Capitol Hill houses. He told Stoddert to tell the board that he would not stay there and insisted on moving into the President's house. Stoddert so informed the board and added that the president was not interested in the other houses White mentioned.

White was not in the city on January 7 when letter came from Stoddert. Evidently, he had not told his colleagues what he had written to the president. Commissioner Scott had not signed the November letter. He was often too sick to conduct business. Stoddert's letter gave him the impression that White had asked the president to choose a house to rent. He dashed a letter off to Stoddert: "We hold it highly dishonourable to violate that faith which was pledged to the City Proprietors when they relinquished their property for a City—." Thornton also signed that letter. White would not take being accused of being dishonorable lightly.(5) The affair at least proved William Cranch's 1797 description of Thornton as the vacillating commissioner.

In her diary on January 7, Mrs. Thornton noted the letter and when the president would send his furniture. She seemed unaware of Scott's outrage. In her January 7 entry, she added: "After dinner we walked to take a look at Mr. Tayloe's house which begins to make a handsome appearance."(6) The walk could have been coincidental to Stoddert's letter. Or did Scott get Thornton to reveal what houses he and White had in mind? Tayloe's house would not be finished, and was likely not planned to be finished, until the fall of 1801, when, if elected, Tayloe would take his seat in the new congress. Perhaps Scott knew that and challenged Thornton to go see that the house could not possibly receive the president's furniture in June 1800. 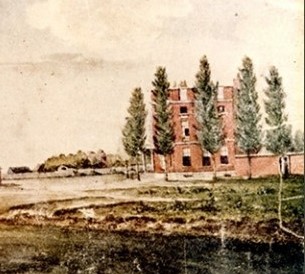 There is more that is open to interpretation. In her diary, Mrs. Thornton described her husband's contribution to the General's houses. On 7th, she made no mention of any contribution he might have made to Tayloe's house, only that it "begins to make a handsome appearance." None the less, architectural historians highlight her entry to show that the Thornton's kept an eye on the house he designed. Her admiration could have been unalloyed appreciation of her husband's genius. But there is another context in which to view her comment. The large brick house rose in a wasteland. Her expression of pleasure was giving credit to civilization in general not to her husband in particular.

That weekend the Thorntons took their friends the Peters for a brief tour of Capitol Hill. They lived in Georgetown and were probably not that familiar with Capitol Hill. He was one of the executors of Washington's estate. She was the sister of Mrs. Law. They both might have a say about where the remains of George Washington and his wife would be laid.

Mrs. Thornton's diary entry describing the visit is cited as evidence that Thornton designed the house: As one historian put it: "It was designed by William Thornton, and was 'a very pleasant roomy house' according to Anna Maria Thornton. Another opines "Thornton's role...is partially but substantially documented by his wife's diary for 1800."(7) Actually, her diary entry shows that Thornton neither liked nor understood the essential design element of the building:

Sunday [January] 12th— A very fine day, as pleasant as a Spring day. After breakfast Mr T. Peter called and mentioned that his wife was at home; we therefore sent the Carriage for her. I, and Dr T— . accompanied them to the Capitol, the General's and Mr Law's houses —the latter being locked we entered by the kitchen Window and went all over it— It is a very pleasant roomy house but the Oval drawing room is spoiled by the lowness of the Ceiling, and two Niches, which destroy the shape of the Room.— Mr and Mrs Peter dined with us and returned home early in the afternoon some of her Children not being well. (8)

Mrs. Thornton's criticism of the room was so succinct that one suspects that her husband informed it. In large mansions or monumental buildings, a high domed ceiling usually looked down on the oval room. That was impossible in a five story town house in which Lovering carefully detailed the height of each room in the contract and built the house for $5800, almost half of the expense of Washington's houses and almost one-third of the contract price for Tayloe's house. Lovering solved the problem of facing an angled intersection with oval rooms and did so in a way that pleased most who saw the house.

the chapter continues exploring Thornton's relationship to Tayloe in 1800

To read more contact me at bobarnebeck@gmail.com for a PDF of the as yet unpublished book

4.. (https://founders.archives.gov/documents/Adams/99-02-02-4080 the editors of these on-line papers transcribed "Taylor" but the letter clearly reads "Tayloe.")